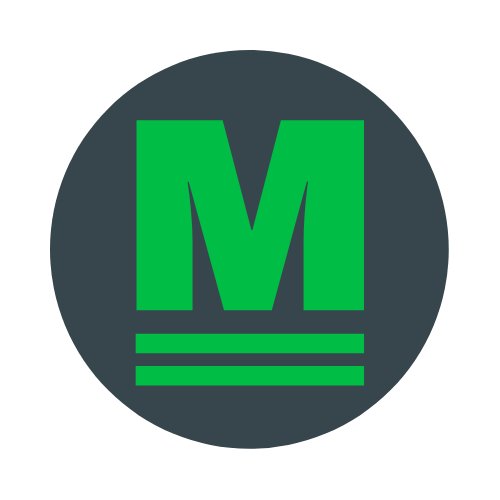 Understood to be the tallest building in Hackney at some 22 storeys, Seaton Point is now undergoing a major EWI rendering refurbishment programme, installed by Mattison Scaffolding Ltd.

“The need to create clear walkways on all four faces of the building in order to optimise the movement of both workforce and materials has been fully met by the scaffolding system,” – John Moore, Contract Manager, Mattison Scaffolding Ltd.

“We were able to erect the structure to the full 62-metre height on two faces to allow the work to commence, then follow that through the remaining two sides. The speed and simplicity of this was significantly greater compared with an alternative tube and fitting scaffold, which would have taken longer, and has helped to accelerate the programme.” The full scaffolding installation was completed in 16 weeks – two weeks ahead of schedule!

The Layher site stair measuring 2.57m x 2.07m, with wide 0.94m aluminium stair flights, has been installed on the scaffold to provide full access to every level while a materials hoist has also been utilised. Access decks for additional ladder access also feature, while two protective fans have been installed on opposite sides of the building above beams which themselves were installed above ground level access.

The project represents a major investment in Layher equipment by Mattison Scaffolding, who approached Layher Hire and Sales specialist Rotamead Ltd. for the supply. “We have worked with Mattison Scaffolding for many years and also have extensive experience of Layher equipment, so the logic of recommending the scaffold for the project was clear-cut,” says Grant Norfolk, Rotamead’s Sales Director.

“This is an extremely impressive installation and one which reflects great credit on all concerned – Mattison Scaffolding and Rotamead,” says Sean Pike, Layher’s UK Managing Director. 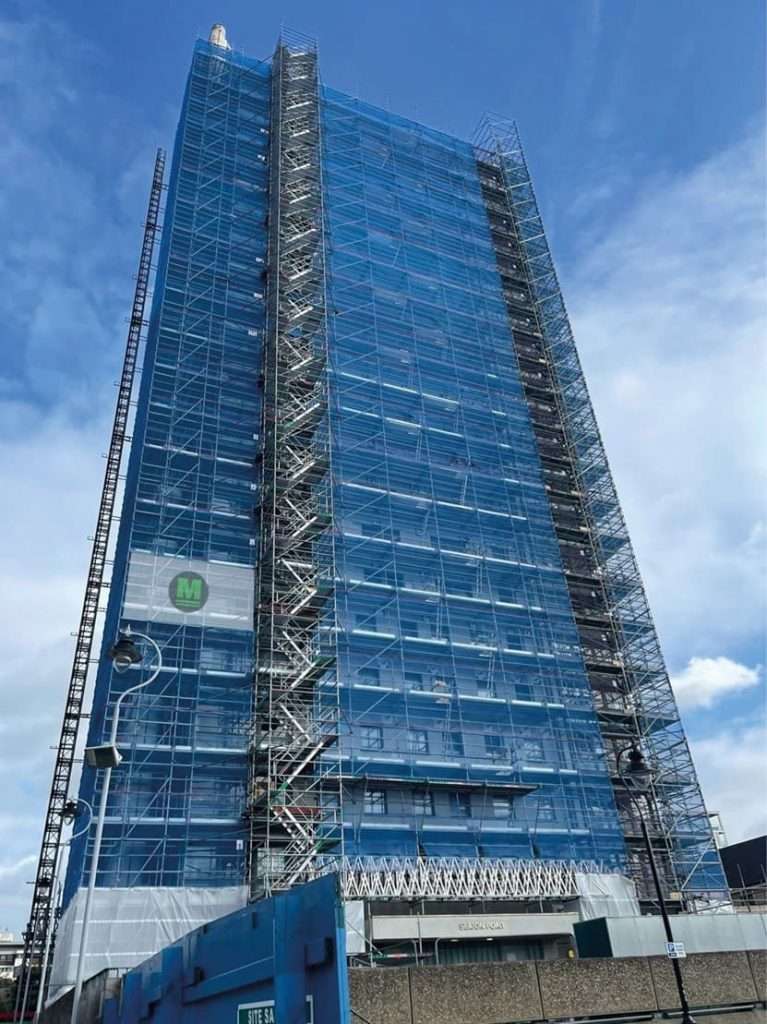 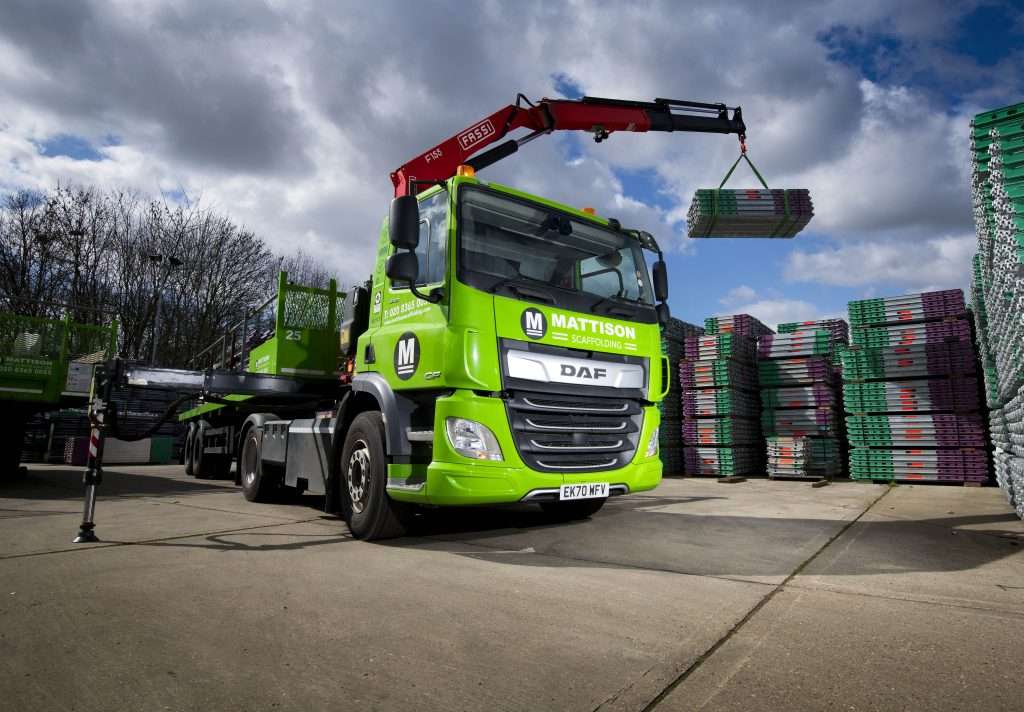 To assist with the government’s urgent objectives to replace unsafe ACM cladding and EWI, Mattison & Express have joined forces to provide a one stop shop for access and exposure for initial fire safety works.

With a detailed and specific safe plan of works, and risk assessment, experienced and fully compliant (including asbestos trained) and insured Express operatives work alongside the scaffolders, allowing existing cladding or EWI to be removed to install scaffold ties to the façade.

With Express in attendance, the BRE or other investigators can commence their inspections and other review areas can be exposed quickly if required. Immediately after completion of the checks, the original cladding is replaced with like for like fixing, or the EWI is replaced and made good with fire rated mastic. The scaffolding can then be removed directly.

In a further collaboration, specific scaffold designs can be produced by the newly formed Express Design & Engineering department, which will greatly enhance turnaround times and flexibility to client’s needs. 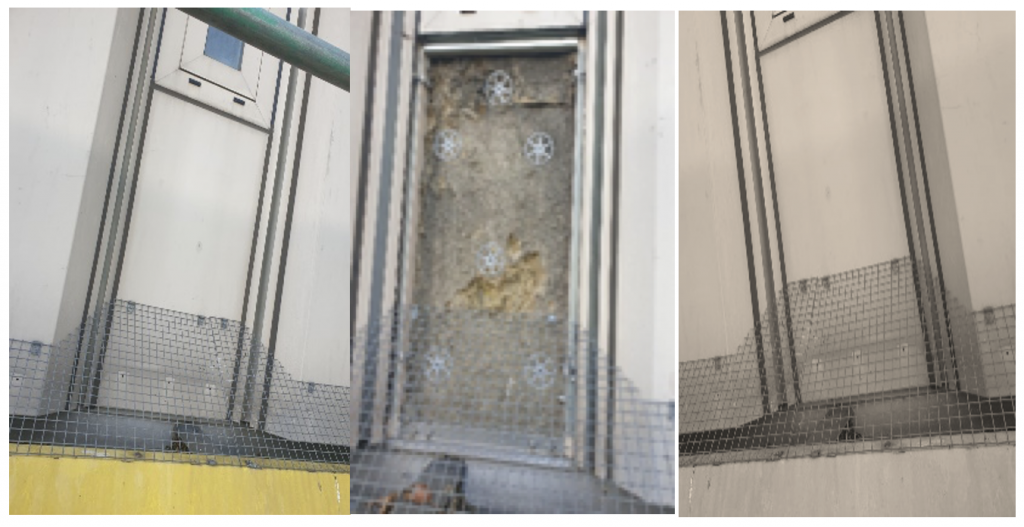 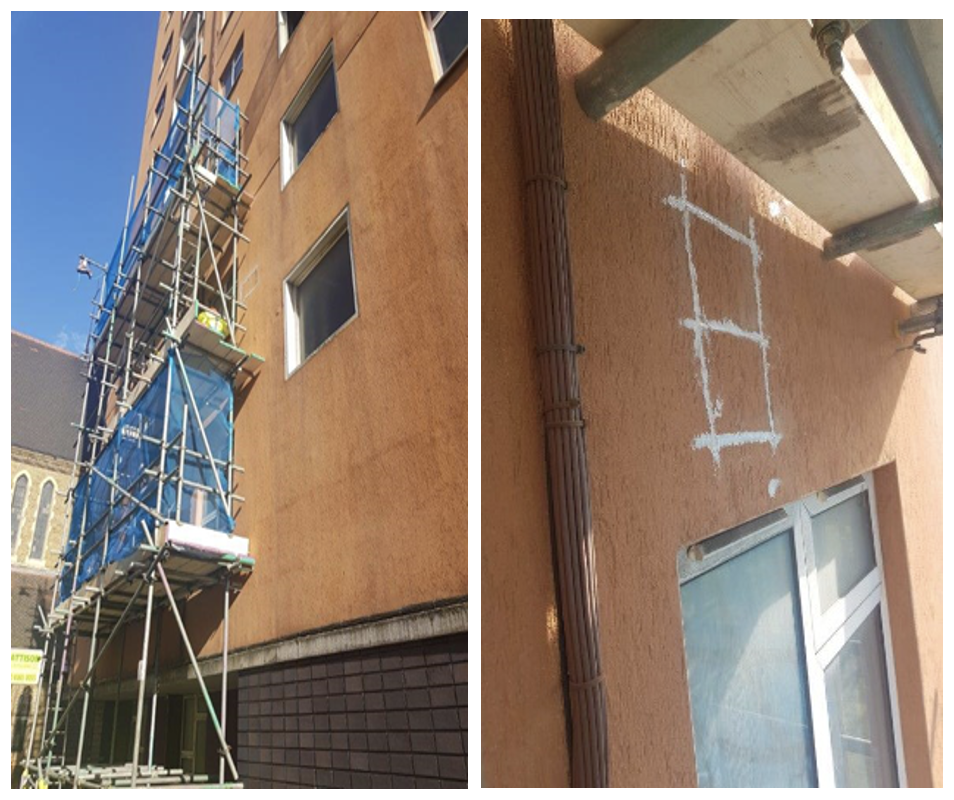 Mattison Scaffolding have worked in partnership for many years with multiple Local Authorities such as Brent, Camden and Sutton, and Housing Associations such as The Guinness Trust, Clarion and L&Q to name but a few.

Various types of properties from single dwellings to blocks are covered from competitive schedules of rates. 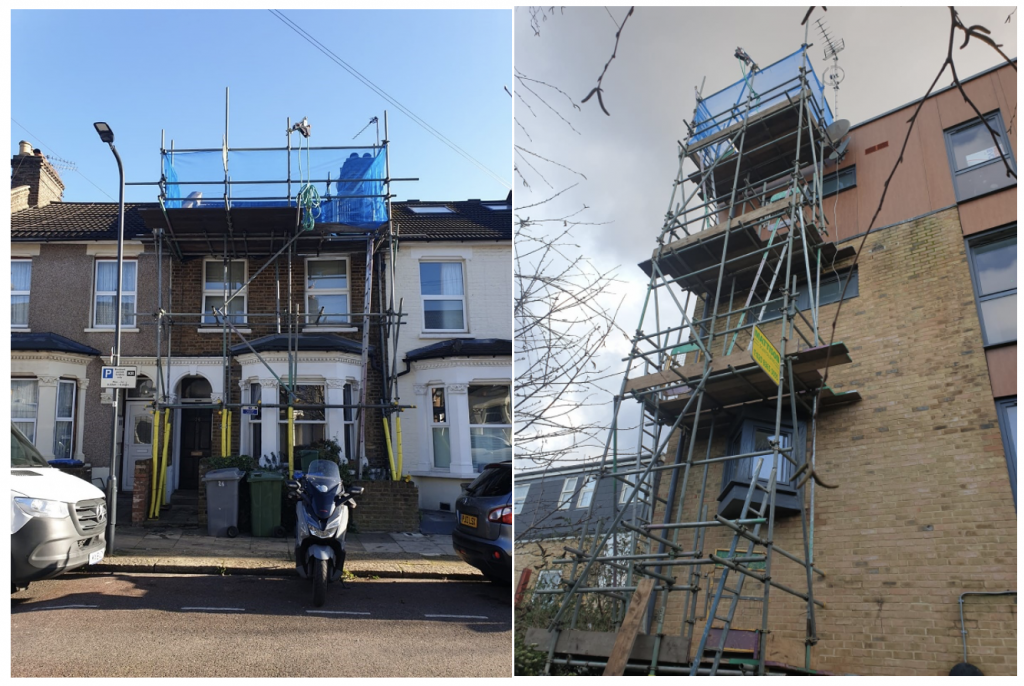 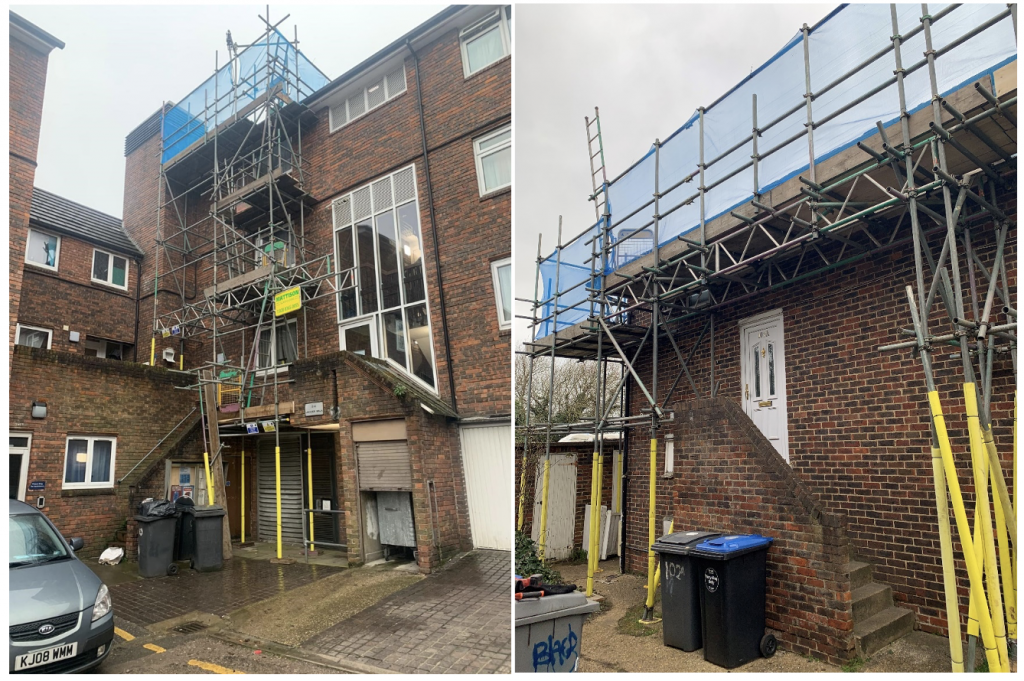 Mattison Scaffolding are pleased to announce that we have completed the purchase of our new commercial fleet of HGV’s for 2021.

Mattison Scaffolding have now purchased 26 new DAF HGV’s from 7.5 tonne up to 30 tonne tractor units complete with mounted cranes. All of the vehicles conform to the new London ULEZ requirements that came into operation in March 2021. By doing so, we are helping to reduce carbon emissions and pollution in and around London.

In order to promote safety when interfacing with vulnerable road users, such as cyclists, these vehicles are DVS (Direct Vision Standard) compliant and are fitted with 150° cameras and sensors to help prevent accidents whilst manoeuvring on London’s busy roads.

Mattison Scaffolding Ltd are committed to a safer and more environmentally friendly London. 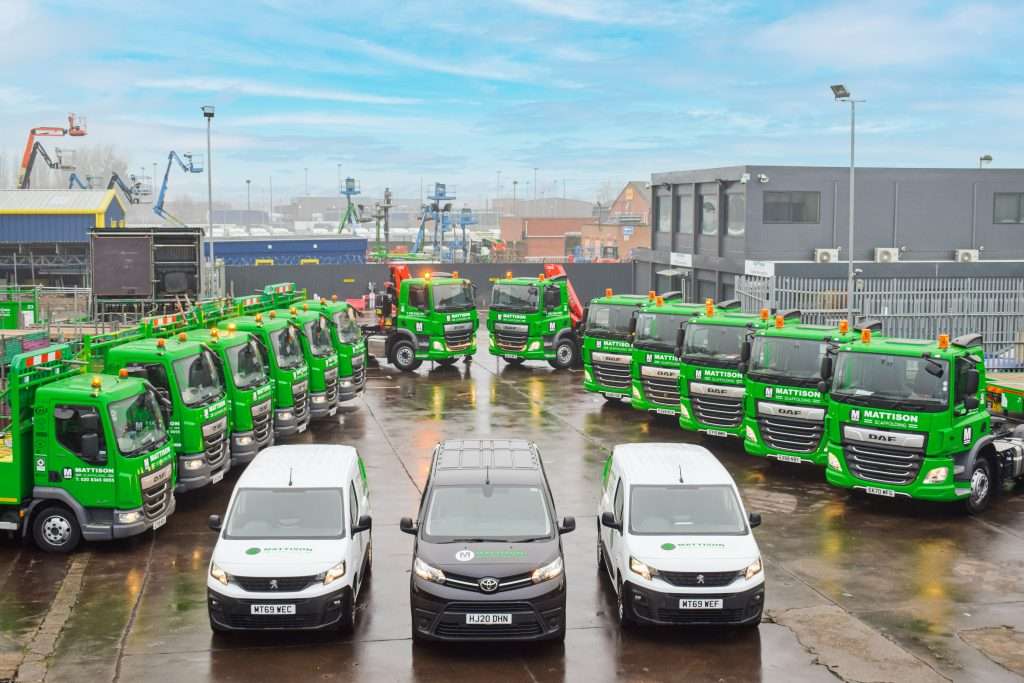 Roof beams erected at ground level, ready to be lifted into position via a crane lift for residences at Kingston University!
As you can see from the photos, our team have boarded the bottom of the beams out as a working area whist erecting the scaffold purlins. Great work by our on-site teams throughout!
Whatever the size or nature of your project, you can rely on our expertise, resources and equipment to help you get the job done efficiently and safely.
We run specialist business teams to manage different kinds of projects, so you benefit from the right professional support at every stage, and a solution that’s completely aligned with your needs. 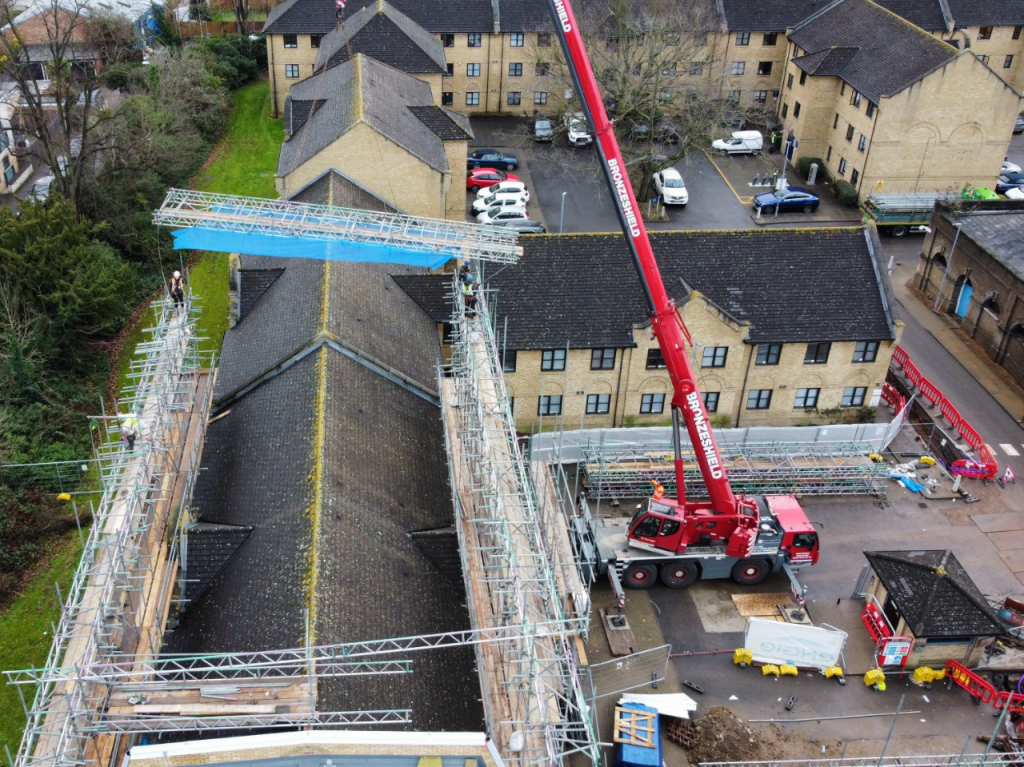 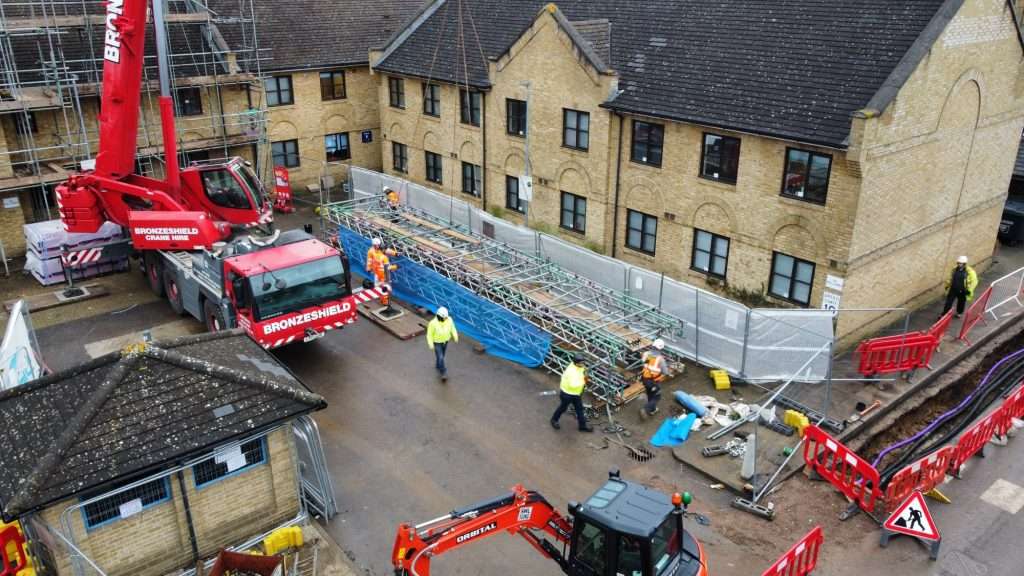 Mattison Scaffolding Ltd have achieved a Constructionline Gold Membership for increased level of scrutiny and assurance.

“This certifies that the member named has met pre-qualification requirements appropriate to public and private sector procurement.” 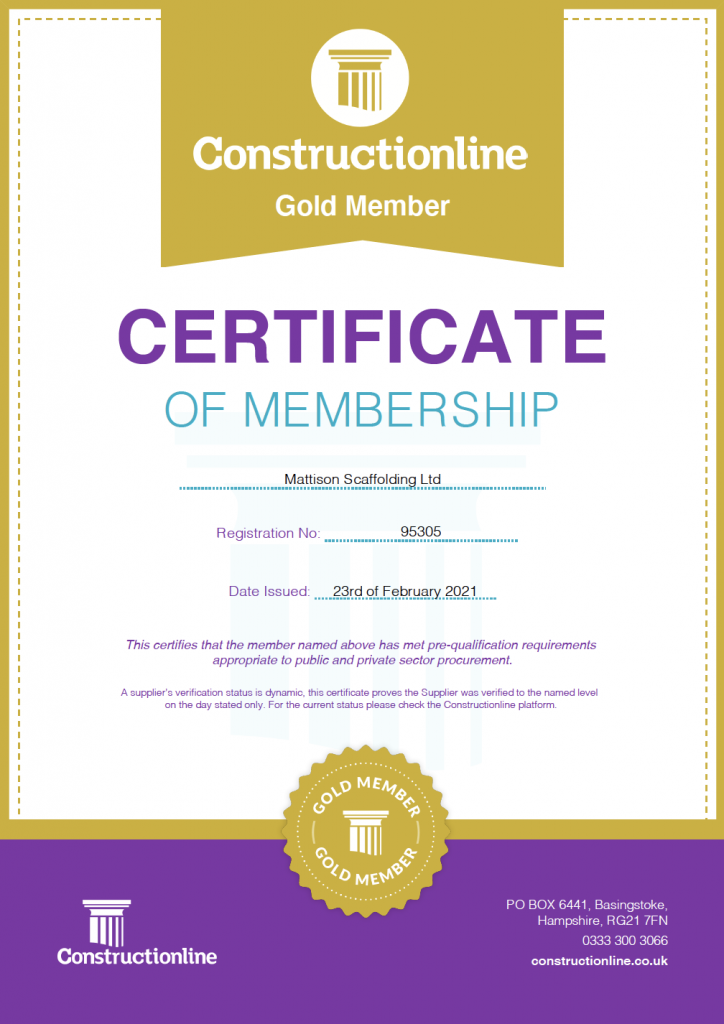 Bob Youngs, Mattison Scaffolding Ltd’s Regional Manager for the South East region, took on the One Million Step Challenge 2020 to raise money for Diabetes UK due to a family member having diabetes.

The challenge was to get one million steps in over a period of 92 days from the beginning July to the end of September.

Bob succeeded with 1,123,313 total steps covered in the period, the equivalent of 19 Marathons! 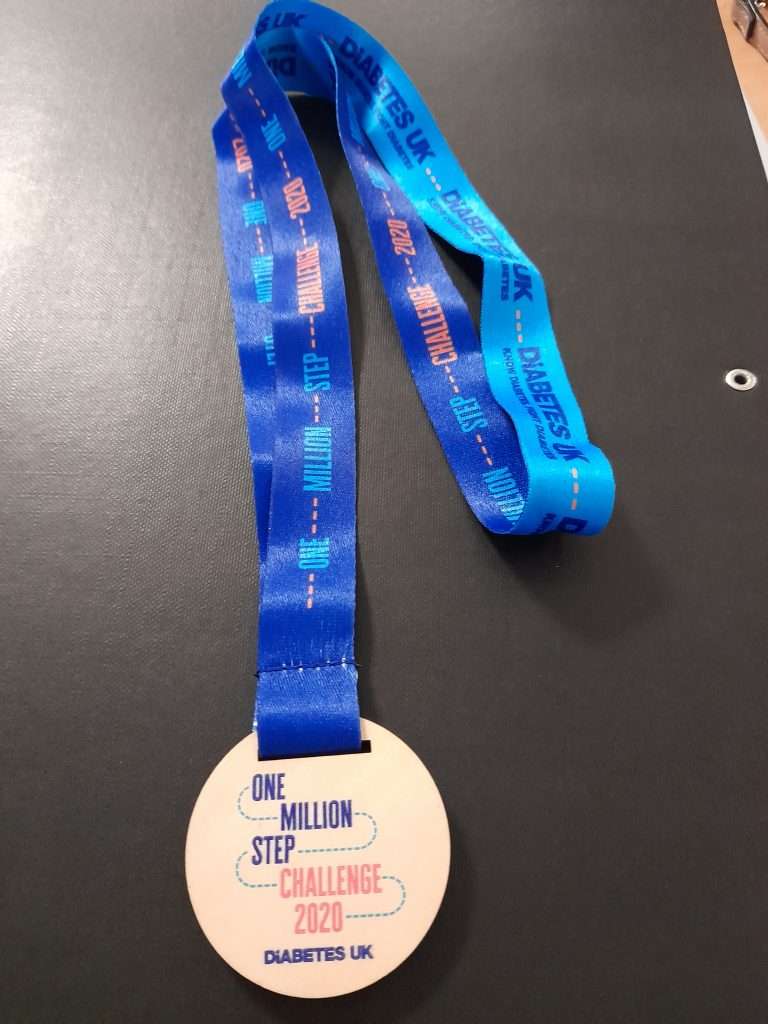 "A truly collaborative approach to construction has been demonstrated by a multi-award winning Haringey Major Works Ultra Site project."

Mattison Scaffolding Ltd fulfilled a two-year contract with the London Borough of Haringey to provide over 2000 decent homes for residents.

Our team wholeheartedly embraced the Ultra Site ethos, becoming a positive force for good as a supplier on this project. Mattison registered with the Scheme and engaged its workforce from the very outset, setting up a series of initiatives to improve health and safety, welfare and respect for the community.

A Grade II listed building due for a safety inspection. Accompanied by Mr. Bob Youngs, MSL’s South London Divisional Manager, the scope and extent of scaffolding works was a fully boarded designed scaffold to all elevations.

The independent scaffold supports a temporary roof over the entire building. Double sole boards are used to support standards on the tarmac surface. Pedestrian walkways have been maintained throughout. A Gantry scaffold was erected over a ramped access. A Dolly scaffold frame is erected either side of the ramp. Cautionary signage is clearly displayed. All fitting threads are capped. All tubes are specifically sized with no impeding protrusion. Pedestrian access and soft-wrap standard protection measures incorporated at base level, protecting third parties from inadvertent collision and trip hazards. A temporary site welfare unit has been installed on site. A site office, canteen area and toilet facility has been made available.

This project was supervised by working on-site Foreman Mr. Paul Mathews. Paul is an Advanced CISRS Card holder. Paul is also SMSTS trained. Our inspection noted that the standard of work on this project is of a very high standard. The scaffolding replicates the design drawing and is very neat and tidy, no protruding tubes or boards. It is evident that Paul has instilled a high degree of pride in his team by producing such work. Great effort has been taken to ensure no loose material is left lying around at any point, all areas are made safe at the end of each day. It is evident that a focus on the safety of others has been a significant consideration to all the team, guard-rails have been erected to safeguard others. 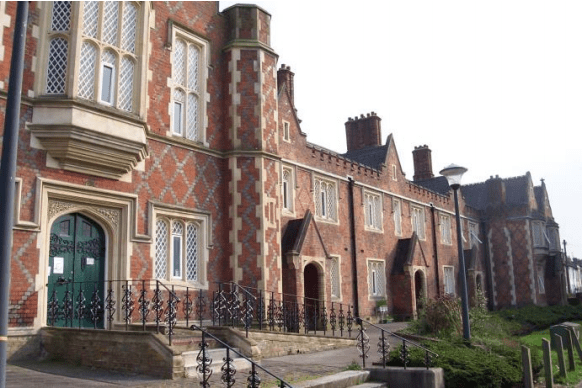 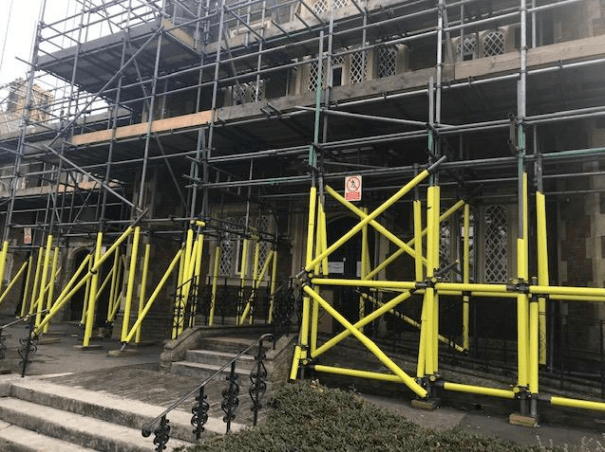 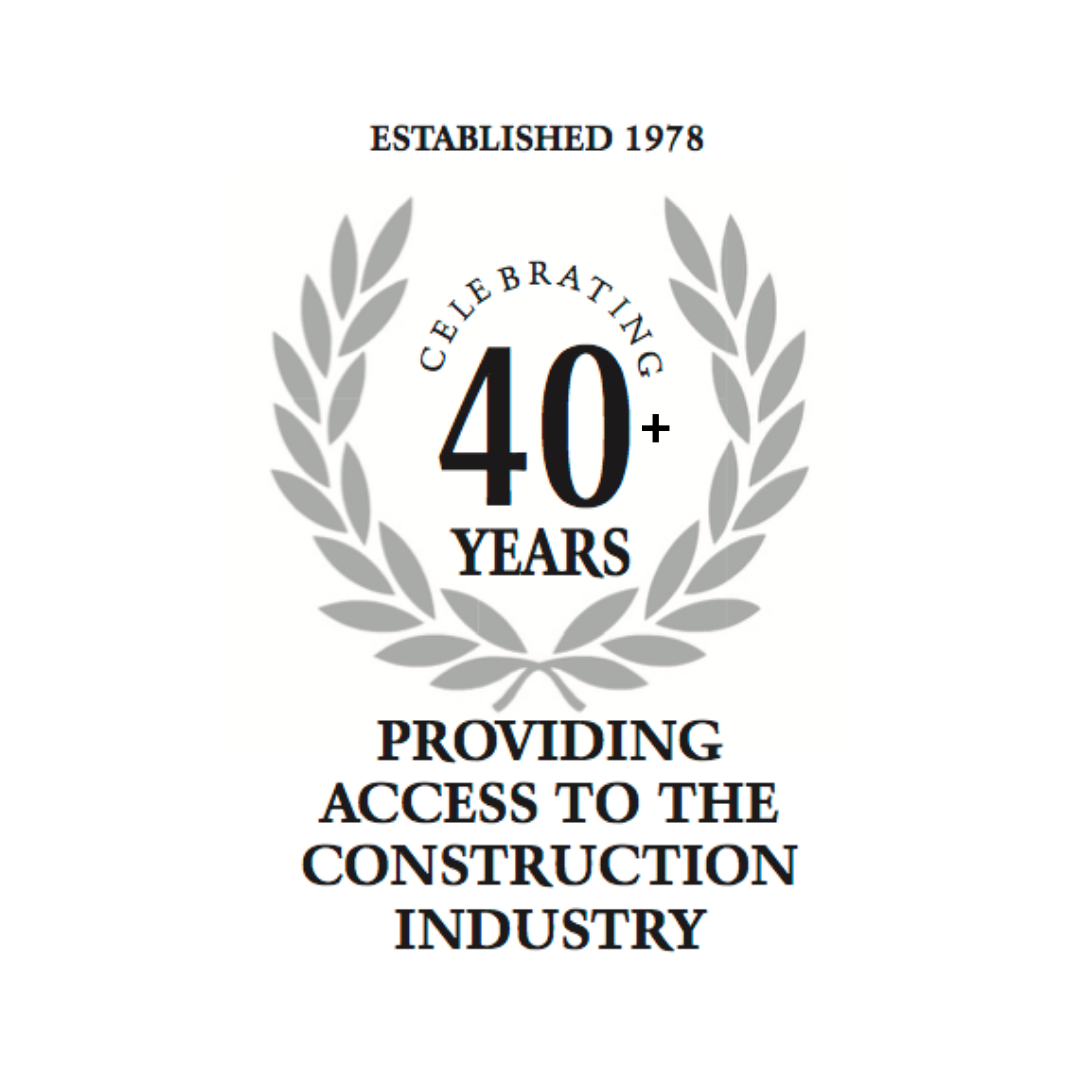 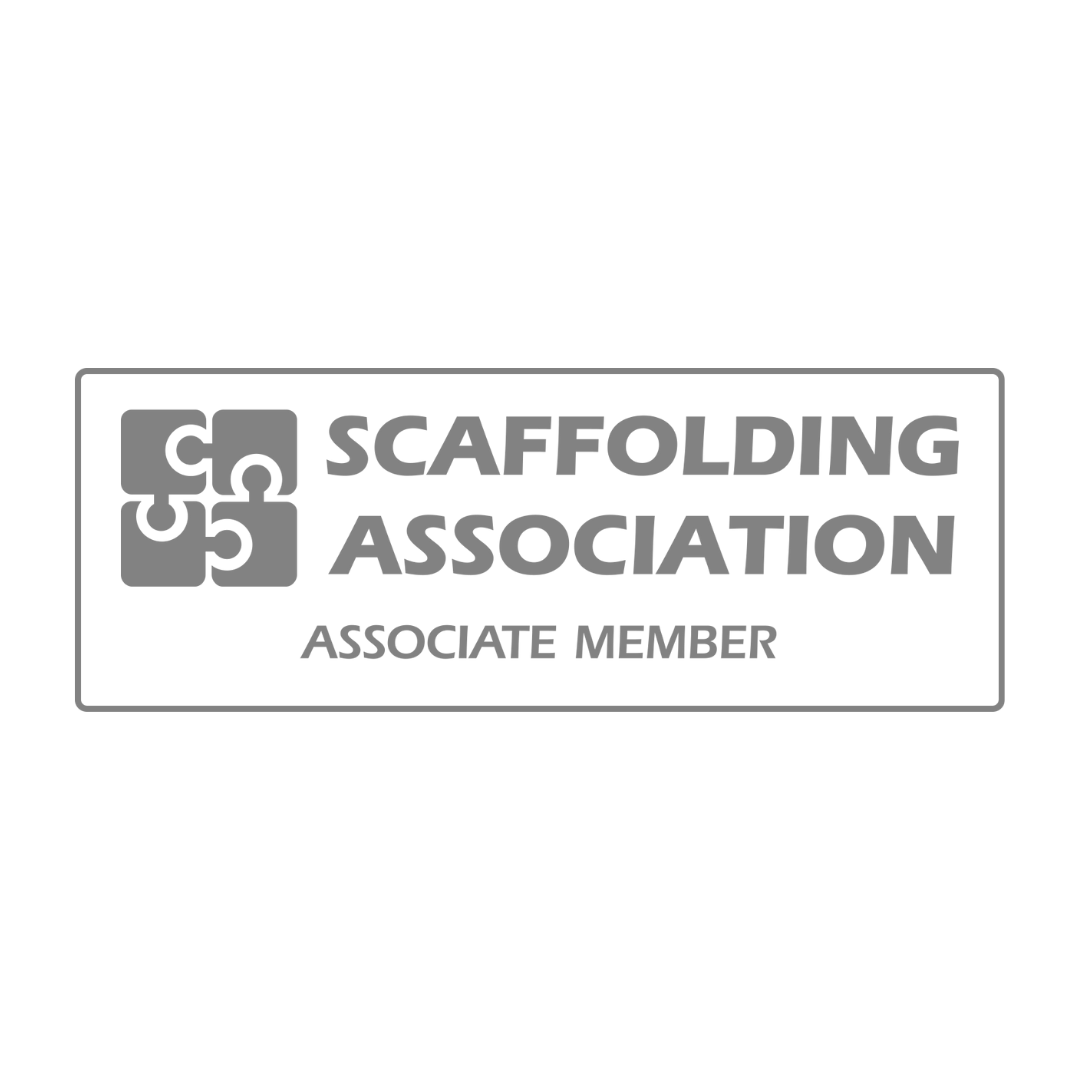 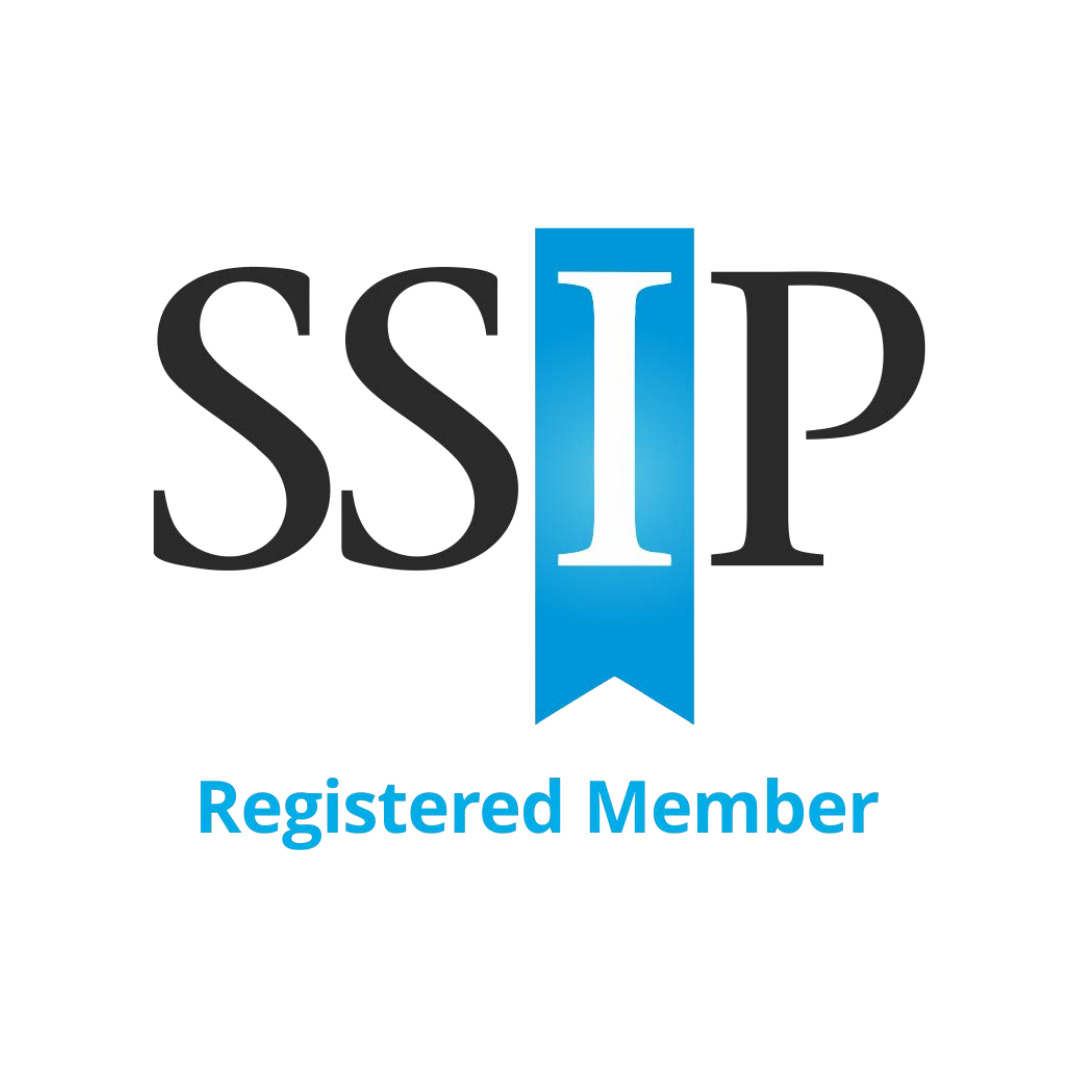 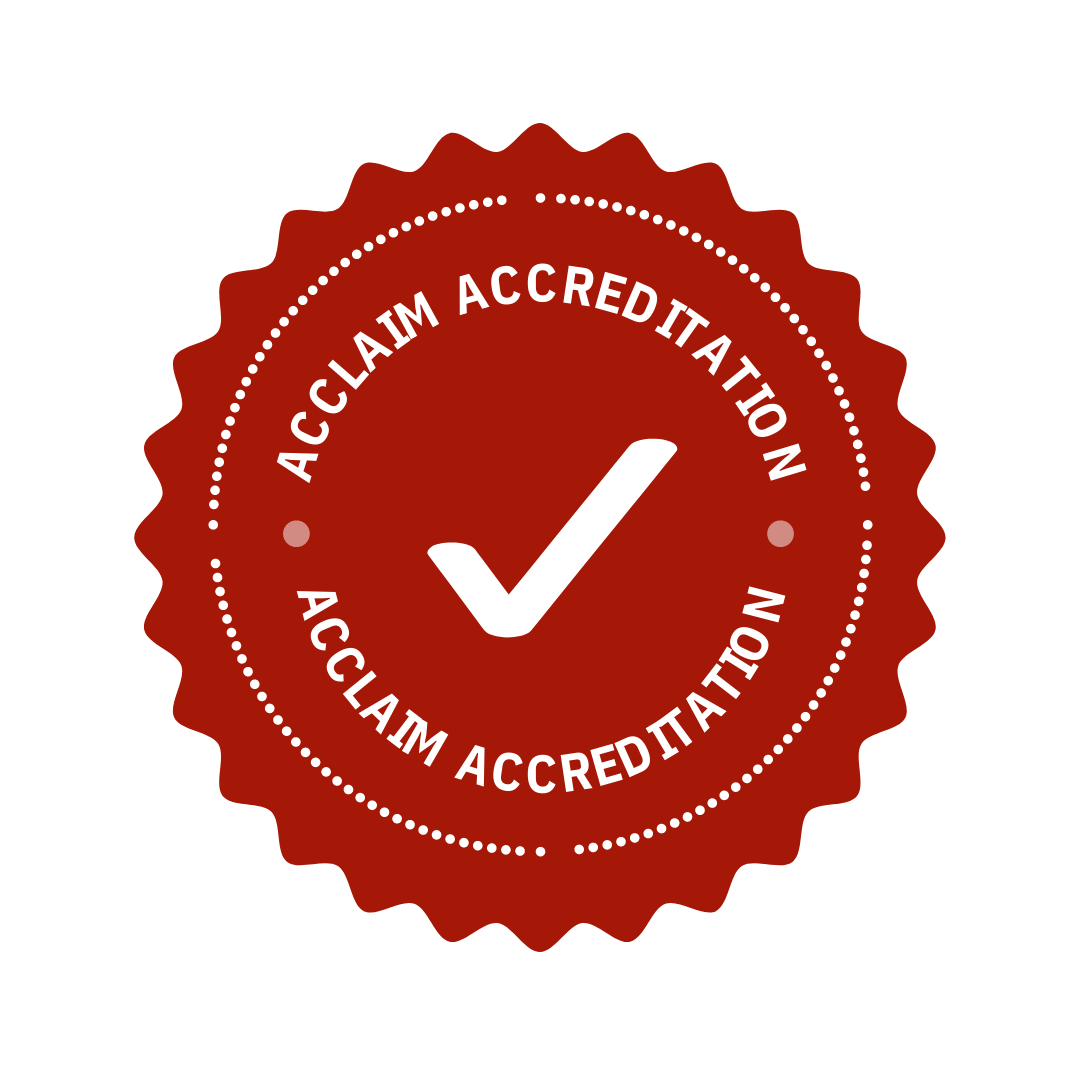 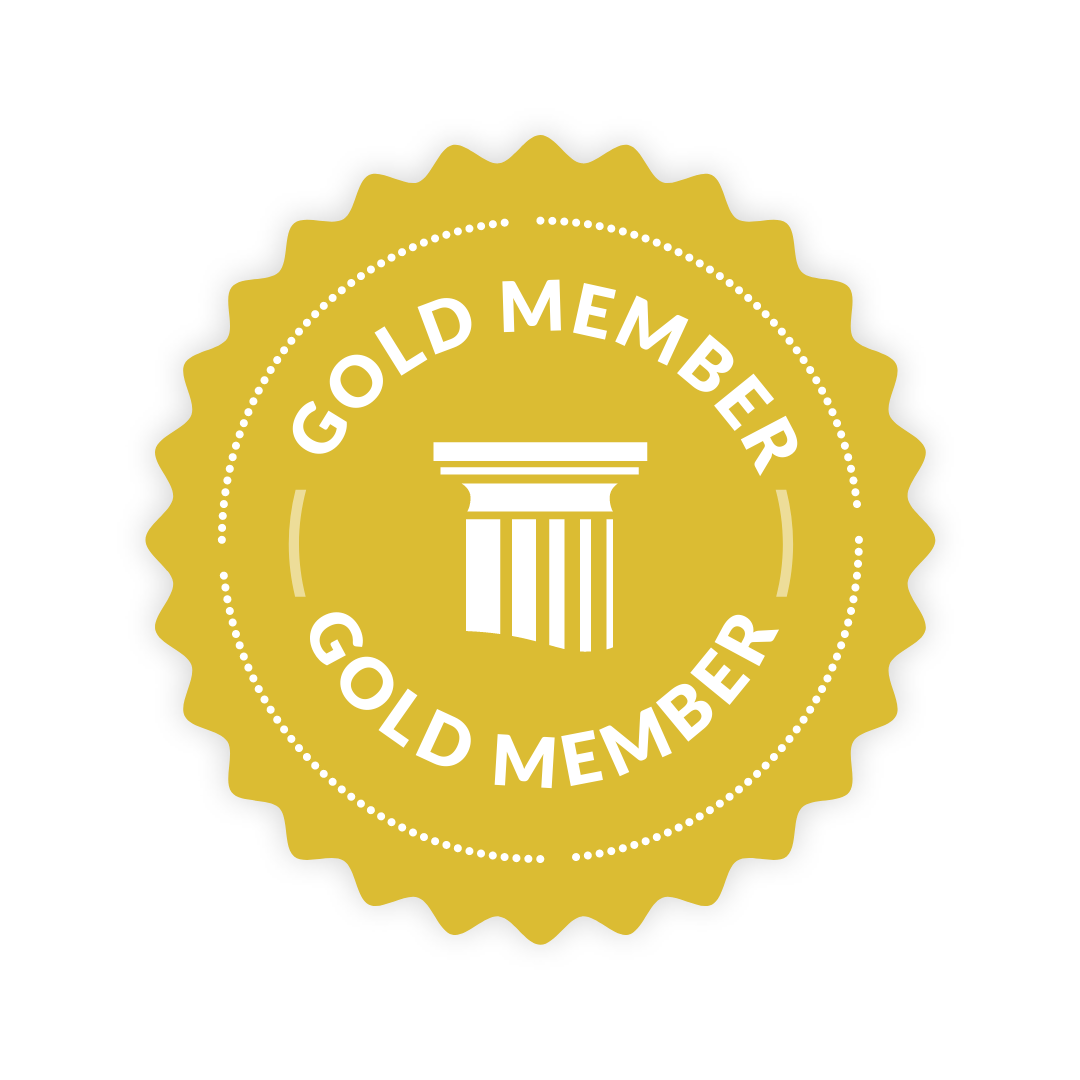 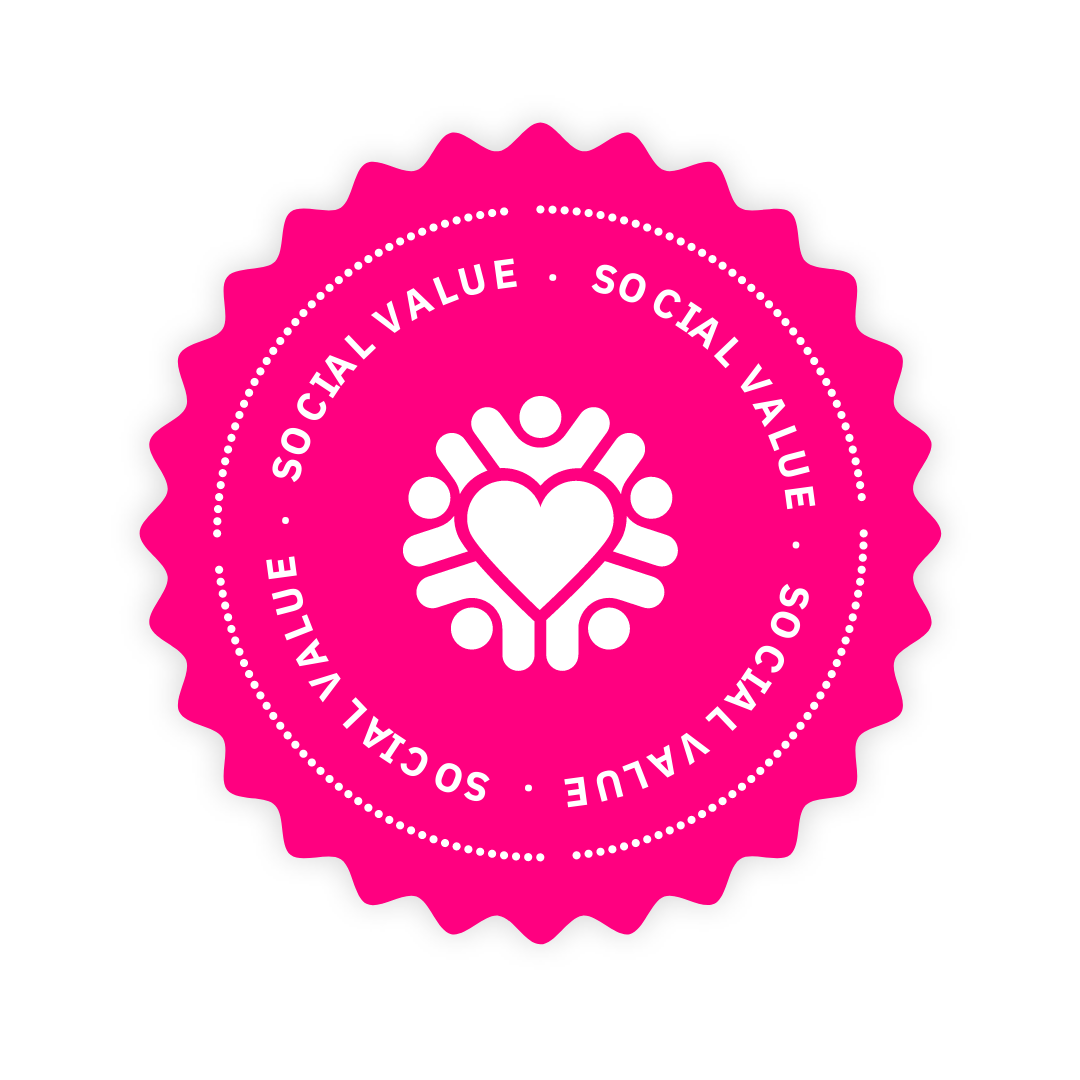 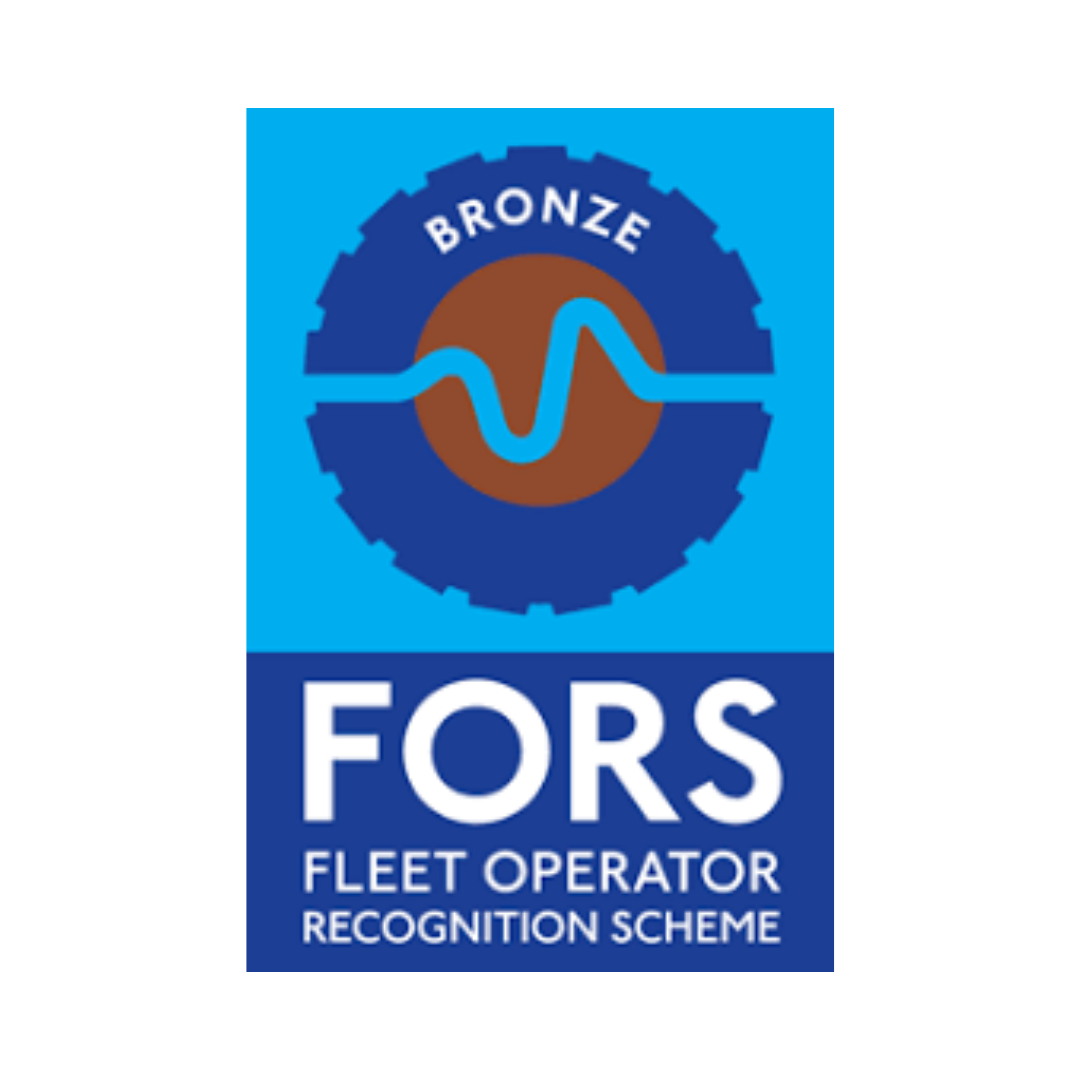 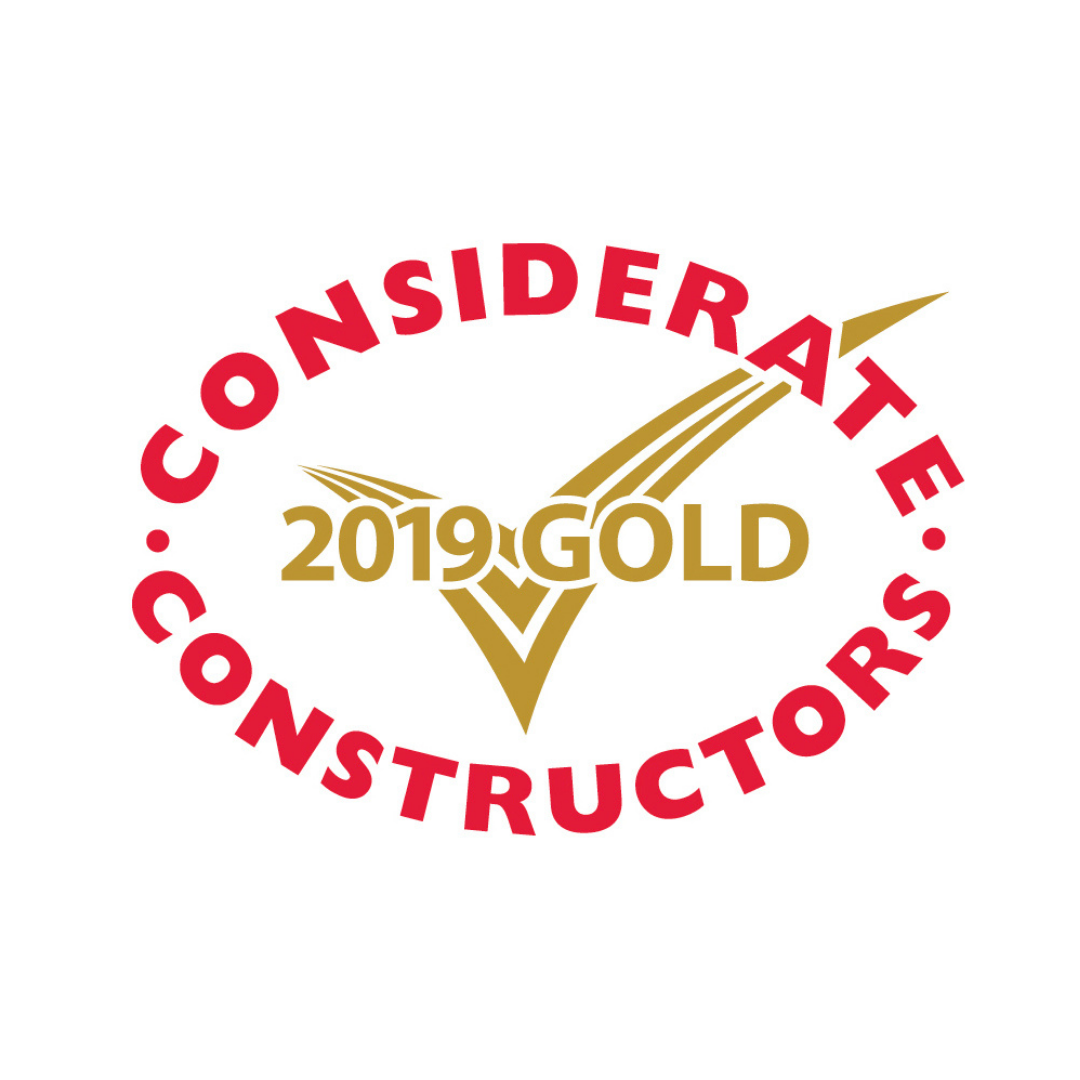 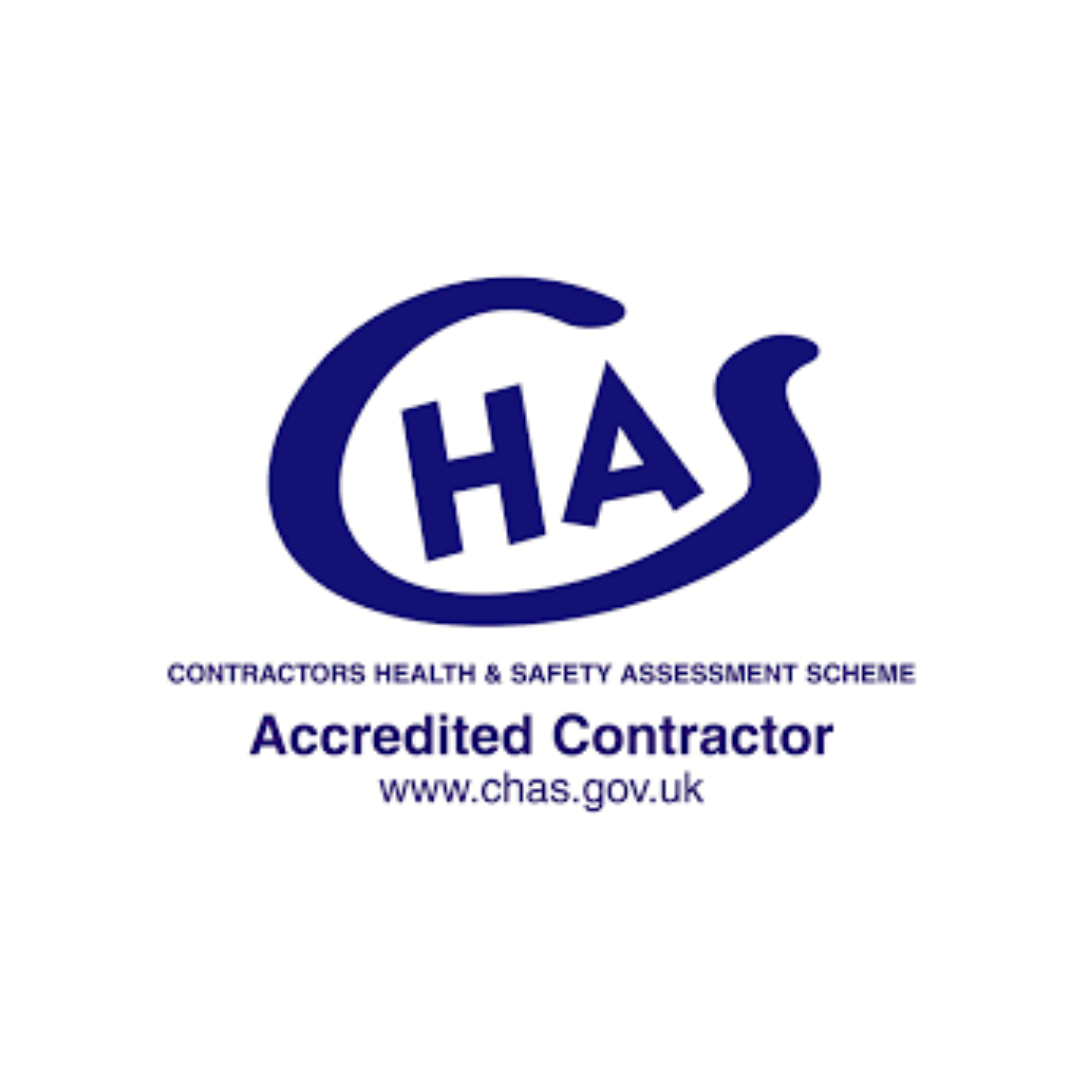